“What’s the best hosting for me?” is a question that’s almost certainly one of the most common questions on forums, Facebook groups, and WordPress meetups. In order to answer this question reliably, it is necessary to consider the circumstances of the project or the website itself, but also the requirements for availability, reliability and data backup.

The best-known type of hosting is probably shared hosting, in which several customers share the storage space and resources of a server. These tariffs, usually referred to as web hosting, can be found with many providers for just a few euros a month and give the small private website or club website a home. There are not only differences in price, but also in the performance offered.

Very cheap tariffs in particular quickly reach their limits if you want to operate a content management system (CMS) like WordPress. Basically, it is advisable not to primarily pay attention to a low price when hosting the site – after all, hosting is the basis for a fast and always available website.

If you have higher requirements than a shared hosting package can cover, server solutions are interesting for you. The customer’s own resources are made available in order to be able to implement more demanding projects. Projects such as online shops, well-frequented websites such as news portals and magazines or sites that cause a higher load on the server due to special WordPress extensions (CRM system, forums, community websites, etc.) benefit from this.

A distinction is made between two variants of virtual server solutions: the “Virtual Server”, also often referred to as “V-Server”, and the “Virtual Private Server”, abbreviated to “VPS”. The difference between the two variants lies in the allocation of system resources. While with a Virtual Private Server (VPS) the number of processor cores (vCPU) and main memory (RAM) are assigned for the sole use of this one server, with V-Servers there is usually a so-called “overbooking” by the provider. With such tariffs, existing physical hardware is distributed to multiple virtual machines at the same time. As a result, they cannot always claim the allocated resources for themselves, which can have a negative effect on the loading times of the pages on them.

Especially with the virtual and dedicated servers there are also so-called “managed server” offers on the market. This means that the customer can fully concentrate on his project and does not have to do anything with the administration, maintenance and security of the server. These demanding administrative tasks are taken over directly by the respective hoster. It should be noted here that “managed” is interpreted very differently by different providers.

Some providers carry out extensive manual maintenance of the respective servers and also monitor them permanently in a monitoring system, which, in addition to the availability, also checks important “vital signs” of the server. For example, the hosting provider retains For example, the processor and memory utilization, the utilization of the existing hard disk/SSD memory, but also the use of the network interfaces are always in view. The scope of services also often includes the sending of a monthly maintenance report, which shows the maintenance work carried out. Especially with cheaper managed offers, it can happen that nothing else happens than that an automated solution takes over administrative tasks and nobody deals with the individual circumstances of the machine.

So-called “cloud hosting”, i.e. hosting your own project with a public cloud provider such as Google Cloud Platform, Amazon AWS or Microsoft Azure, has become increasingly popular in recent years. These providers, also known as “hyperscalers” in technical jargon, play to their strengths in particular in online shops or websites that require flexible scaling (also possible automatically). Here, the capacities of the server are expanded, e.g. B. to be prepared for the onslaught of a broadcast in a TV show, while otherwise a constant, rather low flow of visitors is recorded in normal operation. Compared to classic hosting and server offers, hosting on the aforementioned platforms is usually significantly more expensive. It makes sense to use a solution that is scaled for continuous operation, especially if your own project is constantly experiencing higher traffic. Some providers now also offer cloud hosting as “managed cloud hosting”, which saves the user of these services a lot of training and effort when dealing with the complex interfaces of the providers mentioned. 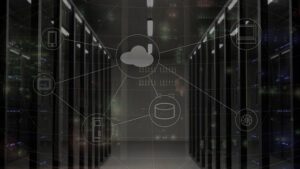