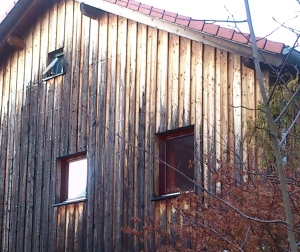 point 1
Existing is very important for a facade permanent ambient climate. A positive effect on durability is when the facade is restored after a rain shower dry well can. It is important whether the wooden facade is on the weather side of the house. Also a lot of trees (especially Coniferous trees like thuja) close to the house hinder a fast drying and thus increase the risk of faster aging of the wood.

point 2
A good substructure the facade with functioning rear ventilation extends the durability of the facade. Here you should on a good constructive wood protection Pay attention and use an appropriate substructure to ensure that no large wooden parts (e.g. diamond profile on substructure) are lying flat on top of each other and that rainwater can cause waterlogging in these areas. (Our tip – use the substructure with support bars)

Example of the graying of a wooden facade

point 3
An untreated facade tends to become damaged by exposure to sunlight and rain graying. During graying, the existing cellulose is slowly broken down by an interaction of bacteria and existing moisture. The lignin remains.

However, the degradation of the cellulose is very slow, a rule of thumb is about 0.5 mm per 10 years. The one that’s left lignin makes a good one by the way surface protection for the years to come.

Point 4
If you want to prevent or delay graying, you can order one non layer-forming glaze with biocide content against blue stain and rot at least twice during assembly. This ensures that the remaining sapwood (which only has a short shelf life) is relatively well protected against rapid decay.

Furthermore, a glaze treatment Existing rainwater rolls off to a large extent and thus prevents excessive “working” (swelling and subsequent shrinkage) of the wood. In later years, a facade treated in this way undergoes a much more even graying.

Conclusion:
If the above points are observed, for example, a Larch woodfaçade can easily achieve a service life of 80 years or more. Through the Choice of native hardwoods how Black locust and sweet chestnut the durability of the wooden facade can be improved, as these types of wood naturally have a longer lifespan than larch wood.

Please note, however, that the above statements reflect our opinion and experience, which are to be regarded as non-binding.