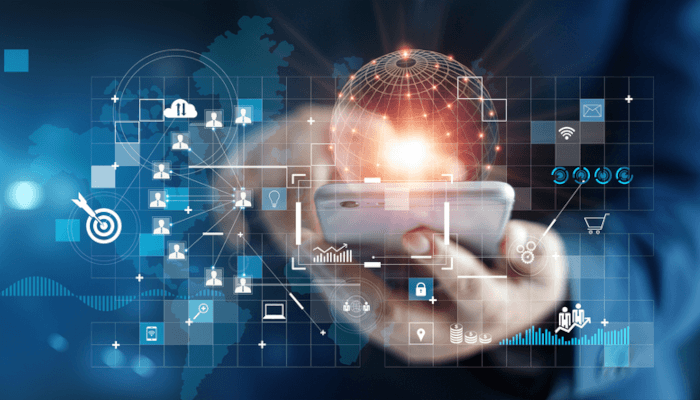 Compared to the previous year (36.2 billion euros), this is an increase of 1.8 percent. This is the result of current calculations by the Bitkom digital association. The spread of smartphones reached a new high in 2022. According to a representative Bitkom survey, 83 percent of people in Germany aged 16 and over use a smartphone. That corresponds to 57.4 million users. “The fascination with smartphones is greater than ever. They inform and entertain us, increase our productivity and support us in many situations in life. Smartphones stand for innovation and growth. This is impressively demonstrated by the multi-billion dollar ecosystem of devices, apps, services and network infrastructure,” says Bitkom Executive Committee member Markus Haas. This is also confirmed by the survey results. For almost all users (96 percent), smartphones make everyday life much easier. Nine out of ten (90 percent) can no longer imagine life without a smartphone. Almost half of the users are mindful. For example, 45 percent have fixed places or times when they deliberately do not use their smartphone. And one in seven (15 percent) controls screen time.

The growth in the smartphone market is being driven by investments in network infrastructure and increasing sales of telecommunications services. Voice and data services make up the largest share at 20.6 billion euros. The segment is expected to grow by 1.6 percent this year. Investments by network operators in mobile infrastructure are increasing even more, by 2.5 percent to 2 billion euros in 2022. Added to this are the expenses for frequencies, buildings and construction work, which are not included.

With the smartphones themselves, 10.9 billion euros are to be implemented. This is a slight decrease of 1.5 percent compared to 2021, when 11.0 billion euros in sales were achieved. Sales are also declining. In 2022, 19.7 million devices will be sold, 3.9 percent fewer smartphones than in the previous year with 20.4 million. According to Bitkom, this is at least partly due to the chip crisis and delivery bottlenecks for components. On the other hand, the average price per device has increased significantly. If a smartphone still cost 539 euros on average in 2021, it will be 553 euros in 2022 – an increase of 2.6 percent. Haas: “The trend is clearly towards high-quality, particularly powerful devices that are less susceptible to repairs.” The app market is by far the most dynamically developing. Sales of mobile applications increased by 15.0 percent to 3.3 billion euros. “The trend towards higher-priced devices can largely compensate for the decline in sales,” says Haas. “The entire ecosystem still offers a lot of potential, as the rapid growth in the app market makes clear. In addition, the networks are getting better and faster and connectivity in the Internet of Things is increasing.”

Sustainability is almost always an issue when buying a smartphone

In addition to the quality, the topicality of the hardware is also very important. Most of the devices currently in use are accordingly new. Six out of ten (60 percent) bought their smartphone within the last twelve months. A fifth (22 percent) use devices between the ages of 13 and 24 months. 8 percent use smartphones at the age of two to three years, another 8 percent have older devices. “There is a great desire for the latest smartphones with the best technology. But compared to previous years, the devices are replaced a little later on average. When in doubt, consumers prefer to spend more money to ensure that they can use their devices for longer,” says Haas. In this context, resource conservation and waste avoidance are also playing an increasingly important role. Sustainability is important to 96 percent of users when buying a smartphone. In addition, attention is paid to a good display, long battery life, good workmanship and the long-term supply of updates. The display is particularly about robustness (96 percent) and the display quality (90 percent), the size is also important for the majority (80 percent). Battery life (92 percent) and wireless charging (78 percent) are important purchase criteria. The photo and video function is also decisive, because camera quality (76 percent) and the number of camera lenses (70 percent) are important for the majority when making a new purchase. In general, almost all (95 percent) pay attention to the processing quality. The long-term supply of software updates (86 percent) also has priority, as does the brand (60 percent). When asked specifically about brand loyalty, the verdict is clear: three out of four users (76 percent) say that they remain loyal to their brand when buying a new smartphone.

The willingness to spend more money for a new smartphone is increasing. On average, users want to spend 232 euros on their next device. That is 32 euros or 16 percent more than in the previous year. 14 percent are willing to invest 300 to 499 euros. Only 11 percent want to pay 500 euros and more. On the other hand, 28 percent would like to spend less than 100 euros. Haas: “The low desired prices can be explained by the attractive combination of device financing and mobile phone contract. The limitation of contract periods by the legislature puts this pricing model under pressure, which could put a strain on price-conscious and less solvent consumers.”

Smartphone is something very personal

The thought of handing your smartphone over to someone else is uncomfortable for many users. One in four (26 percent) would not give anyone access to their private smartphone. Even among relatives and friends, there is great reluctance. Four out of ten (38 percent) would grant access to their own children, 36 percent to their spouse or partner. Three out of ten (29 percent) would grant access to friends, while only one in six (17 percent) would give their own parents access. 9 percent would entrust the smartphone to work colleagues, only 7 percent to a stranger, for example to make a call. “Sensitive messages, personal data, photos and videos are stored on the smartphone. For many, it is part of their privacy, just like a wallet or handbag. Even in the closest environment, many people have a stomachache when they let their device out of their hands,” says Haas.

The strong growth of the past few years has continued in terms of data throughput in mobile communications networks. The need for data volume is correspondingly large. More than half (56 percent) of users state that the monthly inclusive volume is not sufficient. In contrast, only 3 percent say that their contract contains more volume than they need. Most have a contract with 1 to 3 gigabytes (23 percent) or 3 to 5 gigabytes (21 percent) included volume. A fifth (19 percent) have more than 5 gigabytes available, an eighth (12 percent) surf the mobile network without restrictions. “The German mobile networks are becoming more and more reliable and enable higher and higher speeds. At the same time, the range of attractive applications and services, such as watching mobile videos on demand, is increasing. The more intensively the mobile Internet is used, the greater the need for data volume.”

Increasing demands on the networks

Consumer demands on mobile networks are increasing. High demands are made when choosing a mobile phone provider. Almost all users (98 percent) want the highest possible network coverage and the best possible mobile reception at their place of residence. Fast surfing is important to nine out of ten (91 percent). The price sensitivity is high. 93 percent want to pay as little as possible despite high demands. Seven out of ten (69 percent) look for an attractive offer that includes a smartphone. When choosing a network, more than half (54 percent) attach importance to an attractive combination offer, such as a landline or television connection. Soft selection criteria also play a role. Seven out of ten (69 percent) pay attention to the location of the network operator. Two thirds (67 percent) prefer a company headquarters in Germany. Social commitment (66 percent), customer service (65 percent), climate neutrality (60 percent) and environmental commitment (59 percent) also play a role in the choice of provider. “When designing offers and contracts, mobile phone providers need the greatest possible flexibility in order to fulfill the wishes of consumers as comprehensively as possible. Despite a lot of goodwill when it comes to consumer protection, we therefore appeal to politicians that there must continue to be sufficient leeway for the widest possible range of different tariffs and offers,” says Haas.

The future without a smartphone is unimaginable for the majority

Grid expansion: pact for reducing bureaucracy and speeding it up

Mobile networks are of outstanding importance for the ecosystem surrounding smartphones. They are currently being expanded and improved. At more than 1,000 locations, however, expansion projects for mobile radio systems are not progressing, and many procedures are dragging on for more than two years. There are various reasons for this: difficult site searches, lengthy approval procedures and a lack of acceptance from political decision-makers or the local population. In order to accelerate network expansion, Bitkom proposes a pact to reduce bureaucracy and speed things up. The specific proposals are available here. 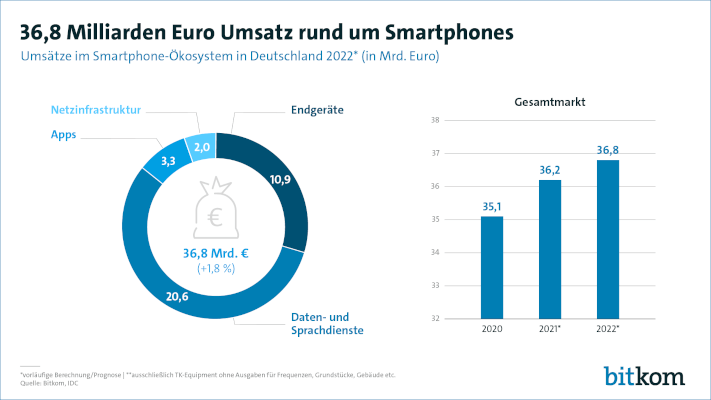 Note on the methodology: The market forecasts are based on data from the market research institute IDC and calculations by Bitkom Research. The basis for the information on the use of smartphones and mobile communications is a representative survey conducted by Bitkom Research on behalf of the Bitkom digital association. In January and February 2022, 1,002 Germans aged 16 and over were surveyed.