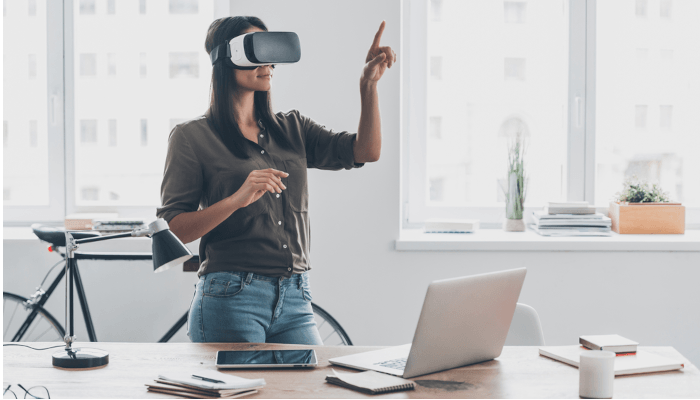 Virtual reality and artificial intelligence are now finding their way into the adult education segment in order to effectively promote further education.

The path to the perfect presentation brings with it a number of challenges. Speaking freely and engagingly in front of an audience requires a lot of practice – whether in front of friends, acquaintances or in the bathroom mirror. It is not uncommon for speakers to develop a form of speaking anxiety and are downright afraid of presenting their ideas and concepts to larger groups. But how can the panic be overcome if not even repeated free speaking in front of friends can help?

Virtual Reality as a problem solver

Anyone who panics at the mere thought of a presentation situation often wakes up with a stomach ache on the day of the appointment. According to studies, around 30 percent of Germans suffer from logophobia, the so-called fear of speech. Anyone looking for help from a voice coach can be disappointed: because the human advisors have fixed working hours and cannot support their customers around the clock. Virtual Reality (VR) is now supposed to help in this area. The Hamburg publishing house Dashöfer has developed the virtual seminar room “EasySpeech” to encourage speakers in their performances.

This is a VR glasses-based program with which presentation situations can be imitated realistically and without any coaches in your own four walls. In order for the circumstances to appear as real as possible, there are heckling and background noises. In this way, users should get used to keeping calm in exceptional situations and mastering interruptions with confidence. A mobile phone ringing or the sentence “Could you please speak louder?” are not unlikely in reality during a lecture.

An AI as a coach enables emotional distance

But can the stress level of the speaker actually be sustainably reduced through virtual reality? Switching from a flesh-and-blood speech coach to technical advances – this can be a major hurdle for many users and often leads to distrust. Although human contact seems essential in some cases, working with virtual reality entails one thing above all: emotional distance. The participant does not have to feel pressured by anyone else and does not allow themselves to be seduced into doubting their skills during the exercise. Even if a round in front of the virtual audience doesn’t go according to personal expectations, the artificial intelligence gives factual feedback and analyzes the speech in real time parallel to the application. Just a few seconds after the presentation, the VR program gives detailed feedback on language and clarity, speaking speed, use of filler words and how often eye contact is maintained with the audience.

EasySpeech also detects the flow of speech, disruptive statements such as “uh” and “uh” as well as the use of pauses and the emotional impact of words (positive, neutral, negative). In this way, the speaker can visualize his weaknesses and improve them qualitatively in further rounds.

Anyone who works a lot during the day knows how difficult it is to find time for appointments after work. That’s why the software offers efficient training around the clock. It doesn’t matter whether it’s late at night or early in the morning – with the software, the speakers are independent of time and place and can choose their presentation environment as they wish. You can also set whether you are standing on a stage with 500 people or only ten people are listening to the speech. Due to the different scenarios, the program is suitable for executives, project managers or sales people as well as for anyone else who is afraid to speak. A success curve indicates the individual development after each session. EasySpeech can also be set to different levels of difficulty in order to further develop its skills. These are based on the learning level of the users.

With the idea for the virtual reality app, Fabian Friedrichs, managing director of the Dashöfer publishing house, and his team are the first on the market. The developers are certain that EasySpeech will fundamentally change opinions about artificial intelligence and virtual reality in the seminar landscape. The handling of the feature of the VR software is particularly uncomplicated and practical. Because if you normally practice your presentations in front of the mirror, you often don’t get enough feedback there.

However, the question remains as to how intensively the technology in the coaching area can be further developed. Artificial intelligence and virtual reality are particularly useful in areas where personal change is sought. Interviews or negotiations also represent life scenarios that can be used by AI tools.

And how deep do you have to dig into your pocket to make life easier when it comes to speech training? The purchase of VR glasses with the installed EasySpeech program has its price of 2,800 euros for a single purchase. However, the high-tech program is then available for a full twelve months and can be used by up to 20 people.