WordPress is a content management system (CMS), i.e. a software tool for storing, organizing and presenting content (text, images, music…). It is primarily used to generate web pages to create, fill and manage a website. The possible uses of WordPress and similar CMSs are diverse. They can be used as a notepad, calendar, address book, diary, online newspaper, discussion platform, shop system, editorial system…

WordPress was initially developed as a so-called weblog, in short: blog, with the idea of ​​providing an easy-to-use program that can be used without programming knowledge to publish texts and images on the Internet quickly and easily. A typical feature of such weblog publishing systems is the publication (screen display) of posts in chronological order – similar to a diary or notepad. At the latest with the introduction of so-called static pages (pages), which are not classified in the post chronicle, and also the possibility of systematizing content with the help of taxonomies (categorization, keywording), WordPress became a full-fledged content management system.

Another typical feature of publication systems for the Internet is the comment function. The comment fields that can be integrated into a post create an interface to the readers, thus opening a communication channel that has contributed a lot to the attractiveness of blogging systems such as WordPress . In contrast to printed books, one’s own thoughts, notes and essays are no longer only published, but also put up for discussion. And in contrast to classic newspapers and magazines, which offer a time-delayed and worth considering reaction option by means of the letter to the editor, WordPress offers and offers the Internet a fast and often thoughtless interaction surface – a communication and thus culture change caused by media technology, which also brought something new for the Internet and has since been labeled “Web 2.0”.

It is not absolutely necessary to install WordPress on the Internet. The system can be set up on your own computer in just a few steps, for example to use it privately as an extended notebook or to index your book collection. A local installation on your own hard drive is also recommended for familiarization purposes – or to prepare a specific project for going live. It also makes sense to save an image on the local hard drive in addition to the online version of your own homepage published by an Internet hoster. For one thing, this offline copy may serve as an emergency backup in case there are problems with the server or the sites have been hacked (it can be very tedious to clean a malware-infected WordPress system). On the other hand, such an offline WordPress is ideal for testing new plugins, themes, updates, etc.

Helpful links on the topic “WordPress”

The official WordPress homepage can be found at wordpress.org. The extensive documentation of the program code and an English-language introduction as well as the official forum can be called up there – and last but not least the latest version of the program for download.
The German-language forum de.forums.wordpress.org on the official WordPress website is not heavily frequented, but offers the advantage for beginners that it is not subdivided by topic. A structural initial orientation, so to speak, is not necessary.
The also official German-language WordPress forum can be reached at forum.wpde.org. As a large forum, the thematic subdivision of the forum posts is obligatory, the high number of members promises quick help.

WordPress.org is the official homepage of the software of the same name. The developer community meets there, the development steps of the open source software are documented, support forums are offered and the free program as well as free themes and plugins are made available for download there in order to then install them on a server or on your own hard drive (see above). WordPress.com, on the other hand, offers the option of using an already installed and externally managed WordPress blog.

The basic version of the free hoster service at wordpress.com simply requires a simple registration (see step-by-step instructions: registration at wordpress.com). After this registration, during which a first block address is set up in the form of myblock.wordpress.com, your ‘own’ weblog is already installed and can be filled with text, images and music immediately. The blogging hoster with the com address uses the WordPress software running under wordpress.org is made available, albeit in a modified, restricted form: it is not possible to install themes and plugins in the basic version, the design options are limited, and your own advertising is not permitted. The identifier .com stands for commercial – even if the service provided by Automattic Inc. (Matt Mullenberg and others) is free of charge in its basic function, special requests cost money. In addition, the company finances itself, for example, by placing advertisements on users’ weblogs. It should be noted that the use of the anti-spam software Akismet, which cannot be deactivated and which diligently collects personal data, makes blogging on wordpress.com that is acceptable under data protection law impossible.

In contrast, the use of the software based on wordpress.org is available free of charge as a download, unlimited range of functions (the implemented espionage functions are also worth noting here). In order to blog online, however, you need to rent storage space on an Internet server and register a domain, i.e. your own Internet address – and: the software must first be installed on the rented web space and then administered. 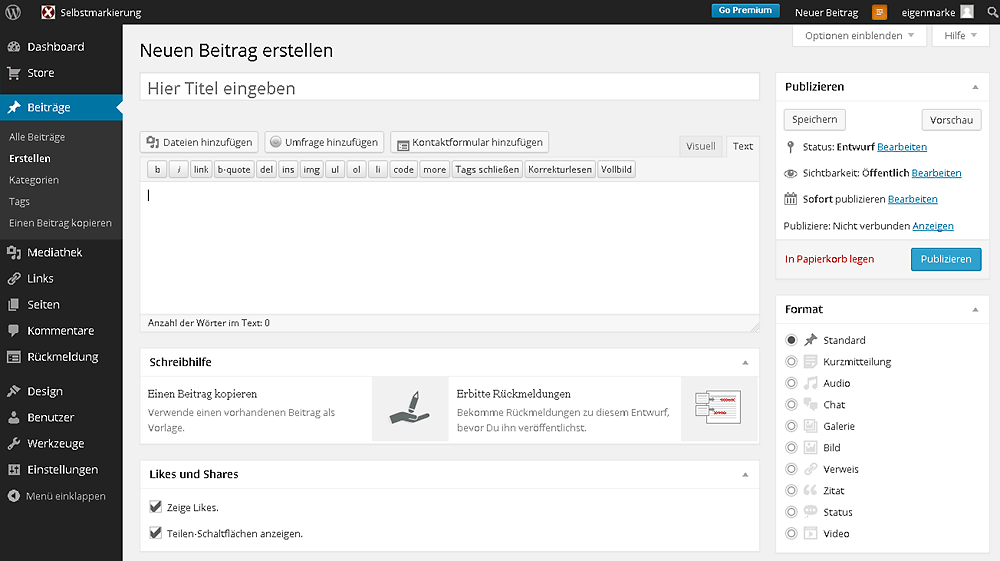 The so-called backend at wordpress.com. This user interface, which is only accessible to the registered blog ‘owner’, offers the function for writing posts similar to a word processing program. The menu items on the left give an idea of ​​the further options for designing and administering the blog. 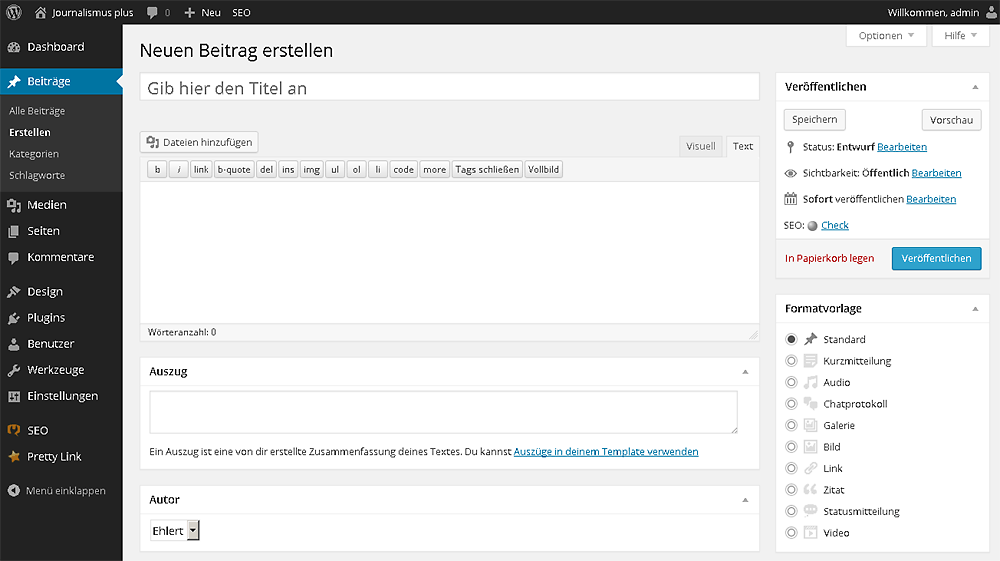 Backend of an installation of the WordPress software from wordpress.org. The user interface is similar to that provided by wordpress.com, but is different in many details and, above all, offers unlimited customization and expansion options. You might also be interested in this:

Previous post How to: Move from WordPress.com to your own domain – checkdomain blog