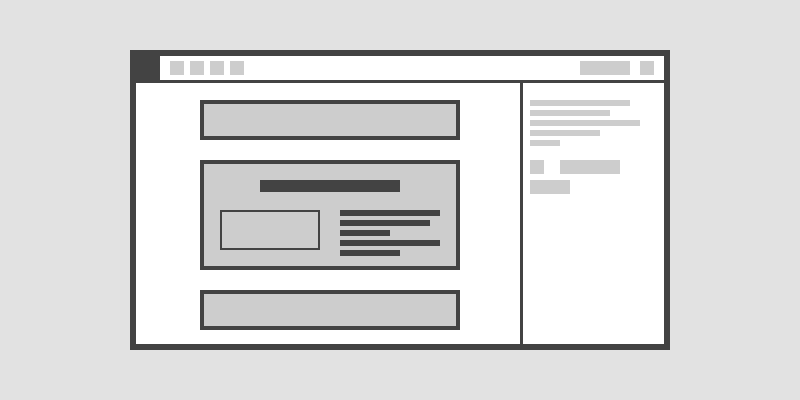 The current version of the Gutenberg plugin brings the experimental status function to edit the entire page. With this, Gutenberg takes a big step in the direction of page builders.

The Block Editor, which was introduced almost two years ago with #wpversion 5.0, was just the first milestone in the #gutenberg project. The idea behind the block concept is that eventually “everything” will be made of blocks.

I had already reported on this vision of the future before the introduction of WordPress 5.0 in the article WordPress and the blocks – a look into the future. Now the development goes further in this direction and the so-called Full Site Editing is available as an experimental function.

Behind this lies the possibility of designing the entire layout of a website in the form of blocks and not just the content. Of course, this is only possible if the theme also supports this function.

Parallel to the version of the Gutenberg plugin, an experimental theme is now also available for testing. It simply goes by the name Q.

After activating the theme on a test system, the pages are no longer displayed. A quick look in the theme folder shows that there is no template for pages. So the theme is obviously only intended as a playground at the moment.

After installing the current version 9.3.0 of the Gutenberg plugin, the experimental Full Site Editing is active immediately and does not have to be activated as in the previous version.

If both Gutenberg Plugin and Q Theme are active, the Customizer will disappear from the menu. An entry in the changelog shows that this is intentional.

It makes perfect sense to bundle all settings in one central place. At the moment, however, the functions are still very limited.

The new Full Site Editor can be found as “Site Editor” in the menu. In addition to the addition “beta” at this point, WordPress also indicates in a message box that cannot be closed that this is an experimental function. 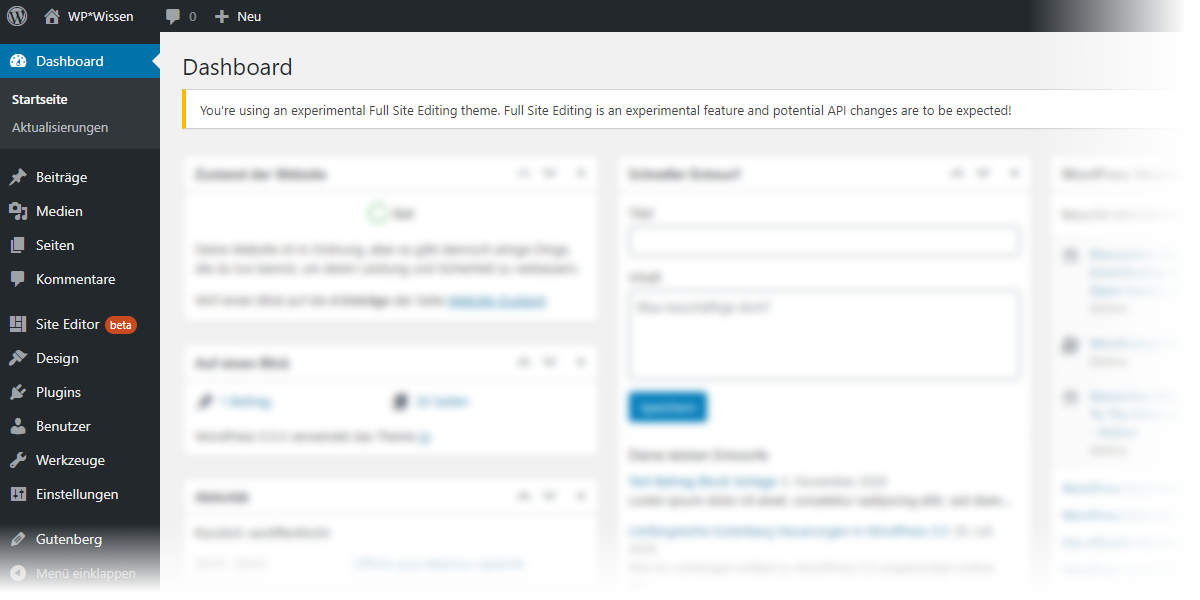 The Site Editor is similar to the familiar Block Editor for editing posts and pages. In contrast to the Block Editor, the Site Editor not only displays the content area, but the entire page including the header and footer. 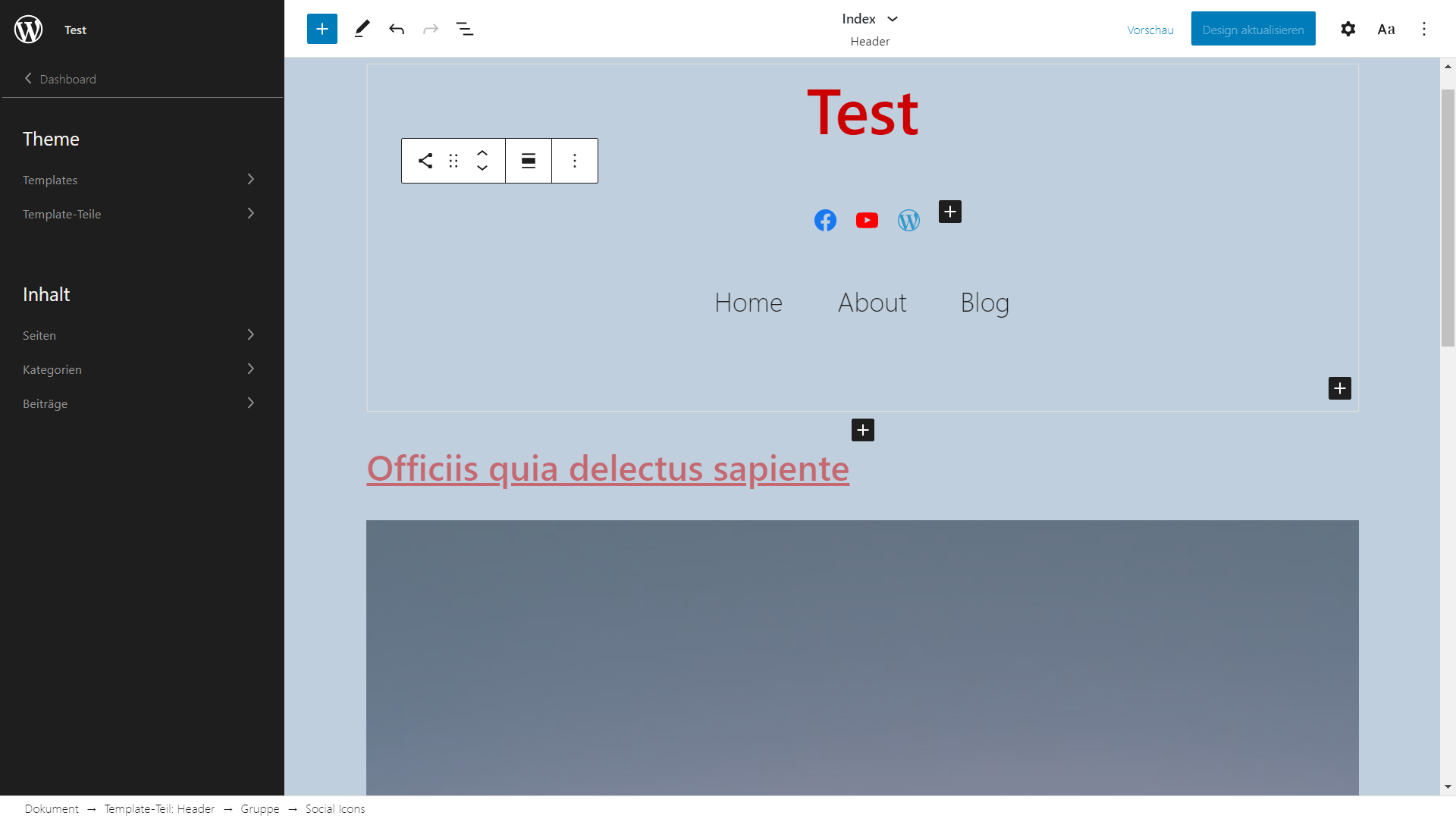 The processing does not initially pose any great mysteries. First I changed the title in the head and was curious if this would also change the website title in the general settings. Indeed it is. Very elegant.

For testing, I add a block with links to Facebook, YouTube and WordPress above the navigation. This works as usual and is immediately visible on the website after saving.

Next I try to change foreground and background color. After a quick search, I discover the Global Styles sidebar. Two custom colors are defined and selected with just a few clicks. 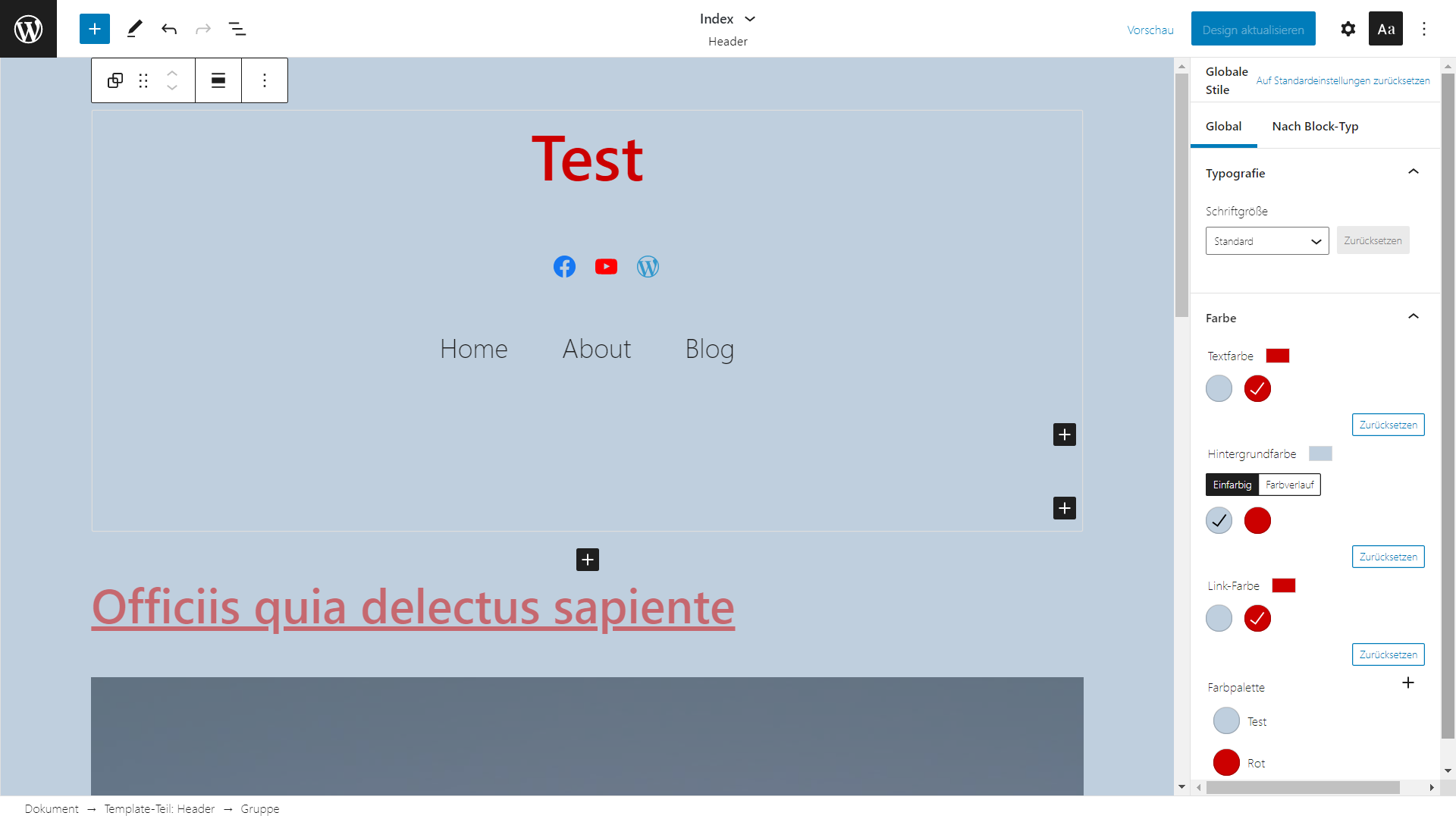 This shows that the text color change is not reflected when navigating in the editor. However, the color is displayed correctly on the website. Another small flaw.

The Global Styles sidebar has a second tab “By Block Type”. The abundance of block types listed here is overwhelming at first. A division into categories would probably make sense here.

In this tab you can customize the style for each block type. However, most of the displayed block types are currently still empty headings.

As a test, I change the font size for the post titles from “Standard” to “Medium”. 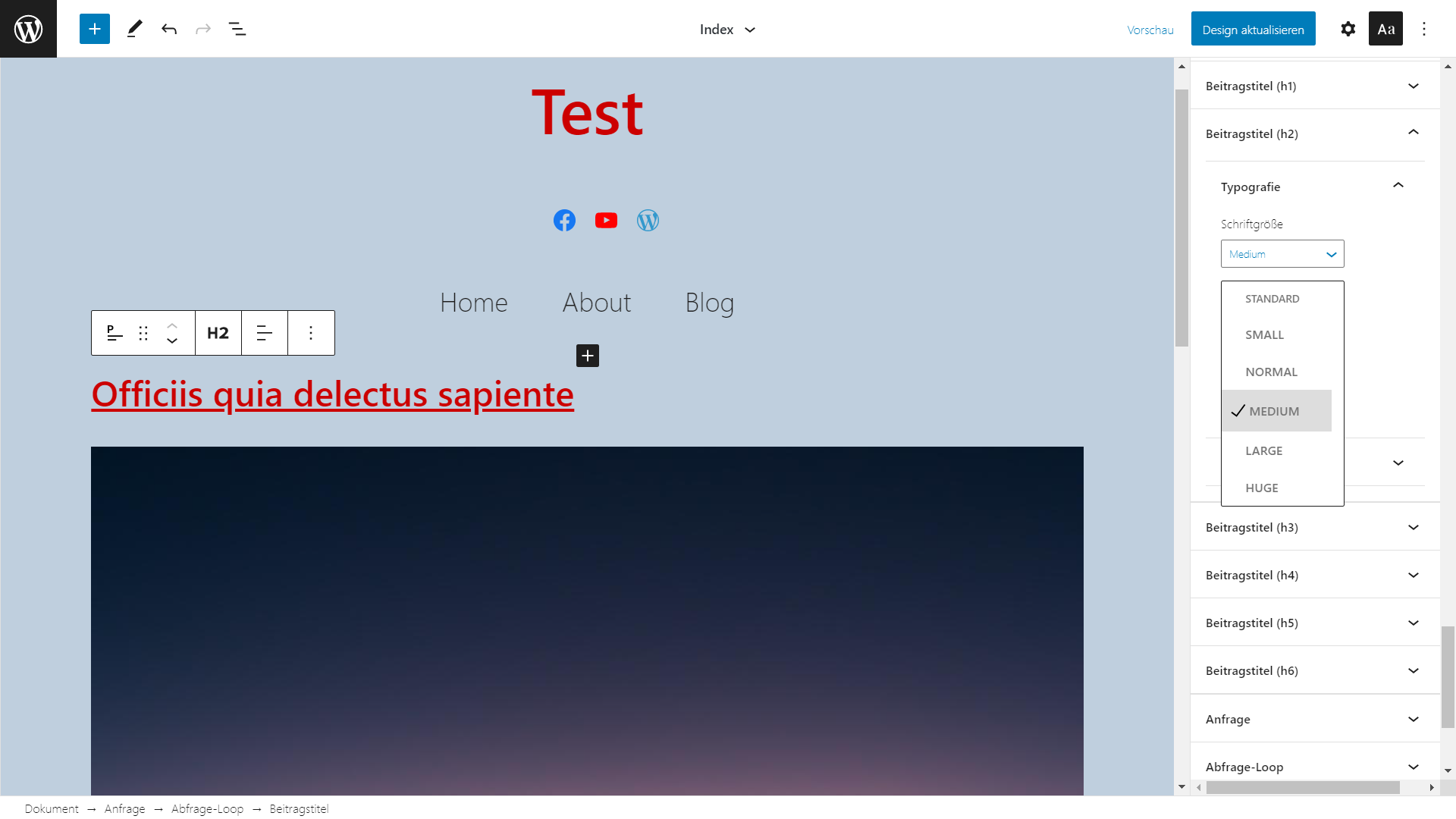 In the preview in the editor, the font size changes immediately. However, nothing is happening on the website. It’s obviously still a very experimental feature.

The settings from the Customizer should probably also be found later in this sidebar. For example, I miss the ability to set a website icon.

Since the customizer is deactivated as soon as the site editor is active, I can only imagine that in the future this bar should hold the settings that can be found in the #customizer today.

The click on the WordPress logo at the top left offers a surprise. Instead of exiting the editor and returning to the dashboard like the Post Editor does, another navigation bar opens in the Site Editor.

Here you can select the templates to be edited, which unfortunately does not work at the moment. Attempting to select the post template always exits the editor.

However, you can also select the content that is to be displayed in the preview. When you select a single post, you still get to the post template via a detour.

Also the parts. from which the templates consist can be selected individually. Currently these are only headers and footers. I don’t quite understand the meaning, since these parts are visible and editable in the overall view of a template anyway.

This may become more conclusive as more template parts are added. In general, the entire navigation is a bit bumpy for me.

How far is the Gutenberg Full Site Editor?

Some things are already working quite well. But essentially the whole thing is actually still very experimental. In my opinion, it is not yet more than a first glimpse of the direction in which things are going.

What does Gutenberg’s Full Site Editor do?

The next major phase of Project Gutenberg brings the ability to design the entire website with it. A theme that supports full site editing is then just a shell that holds the blocks. The design is flexible.

This brings completely new possibilities in WordPress. Opportunities that are only available today with page builders (or themes with an integrated page builder). And that directly in WordPress itself.

If the Full Site Editor works satisfactorily at some point and several themes are available for it, you no longer have to commit to a page builder and you have more flexibility when changing themes. At least in theory.

In the long term, this is difficult to estimate. That will certainly not be the case in the medium term. The lead of page builders is too big. The road that full site editing with Gutenberg still has to go is too long.

In addition, the well-known page builders have a large number of users and will certainly have their fans for a long time to come. Should a corresponding development be foreseeable here, the manufacturers will definitely have more than enough time to react to it.

What can I do if I don’t want this?

The introduction of the Gutenberg Block Editor has caused some controversy in the WordPress community. This is not surprising, since the Block Editor represents a paradigm shift. The strict separation of layout and content is thus somewhat eliminated.

The arguments of both opponents and supporters are understandable to me and I do not want to go into them any further at this point. The fact is, however, that the Classic Editor plugin, which completely disables the Block Editor, is currently the third most active WordPress plugin in the list.

The Gutenberg Site Editor is another big step towards becoming a page builder at the heart of WordPress. It is foreseeable that the waves will rise again here.

Anyone who cannot or does not want to get used to this development could consider switching from WordPress to ClassicPress. ClassicPress is a fork of WordPress based on WordPress version 4.9 – the last version before the block editor was integrated.

The experimental feature of full site editing is currently nothing more than a first glimpse of the direction in which WordPress will develop. As far as I know, there is no plan by when the Site Editor should be integrated into WordPress

The project is quite exciting. But it can definitely be assumed that a future integration into the core of WordPress will again provide a lot of explosives.